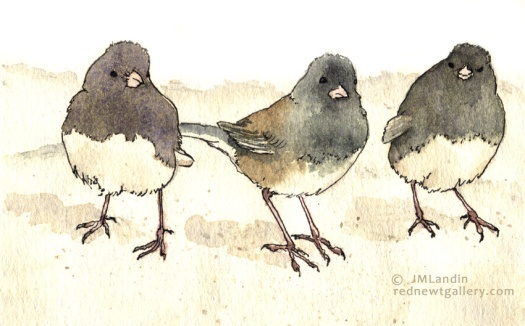 Those small slate-and-white sparrows hopping across the frozen ground are true snowbirds. They spend summer in Canada and move south to the U.S. during the winter. Some, like their human counterparts, even migrate to Florida.

In the late 1800s, R.W. Shufeldt wrote of two birds called “snowbirds.” One medium-sized bird, the Snow Bunting, became known as the “snowflake.” The smaller bird, the Dark-eyed Junco, was unequivocally called the “snowbird.” Shufeldt expressed his displeasure at the bird’s new moniker “junco” – he tried to determine, unsuccessfully, the etymology of the word (it means “reeds or rushes”) since the Dark-eyed Junco does not live among reeds or rushes.

Shufeldt’s article also referenced Alexander Wilson’s description of Junco folklore. New Englanders told Wilson that Dark-eyed Juncos change their plumage to become the Chipping Sparrows of summer. Before you laugh (or after you’re through), many birds significantly alter their plumage during the breeding season… although the Dark-eyed Junco does not. These two birds are both sparrows, trill similar songs, and feed on the ground.

While Dark-eyed Juncos do not morph into Chipping Sparrows, they have their own form of transmutation. Those round balls of bird aren’t fat, they’re fluffy. Feathers trap air, an excellent insulator. The birds puff up their feathers, a downy winter coat, keeping them toasty warm.

p.s. Red and the Peanut wrote a great post about the name “snowbird.” I recommend it!