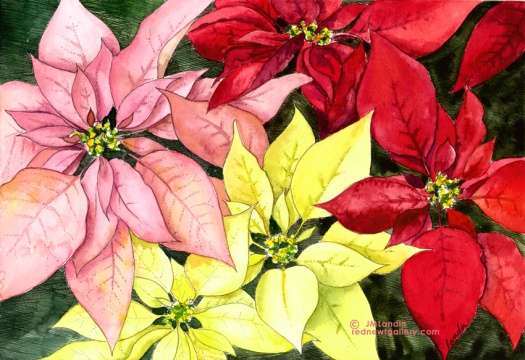 Politics was different in the early 1800s. You didn’t even have to run for office to be elected. Joel Poinsett’s friends nominated him to the South Carolina House of Representatives, and he won. By that time, he’d already completed years of travel through Europe, Russia, the Middle East, and South America where he’d met with foreign ministers, consuls, an empress, and many other political figures.

Within a few years, Poinsett became a U.S. congressman and then the first foreign minister in Mexico. That’s where he saw that plant that would later carry his name. He sent cuttings back to his greenhouses in Charleston and introduced the United States to a beautiful Mexican plant. Unfortunately, Poinsett got in a bit of trouble over his political views in Mexico (the word “poinsettismo” was coined as a result of his intrusive meddling) and was recalled from his post. Poinsett went on to cofound the National Institute for the Promotion of Science and the Useful Arts, later known as the Smithsonian Institution.(1)

Of course, the Poinsettia was well-known in Mexico long before Joel Poinsett. The plant is called cuetlaxochitl (pronounce), and grows as a shrub in Mexico City. The blood-red bracts are symbolic of sacrifices and creation.(2)