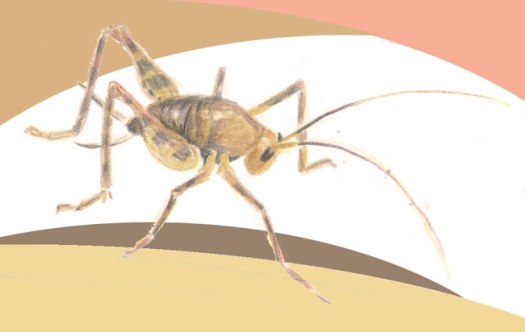 Camel crickets (Ceuthophilus sp.) enjoy hanging out with humans. Perhaps you provide shelter to some in your garage or basement. These insects lack one major cricket trait though – chirping. Sound production should allow camel crickets to find each other in a dark cave or crawlspace. So, why no chirps?

One possible reason for the lack of chirps is a high risk of predation. In other species of crickets, those who call more or longer often end up as a snack. 1, 2 While I would hope camel crickets are relatively safe from bats and birds in your basement, spiders and mice are the crickets’ major predators. Both possess a solid sense of hearing.

Many crickets have parasites who also seek hosts by sound. Chirps attract female crickets, but they also draw mama parasites searching for a cozy spot to lay eggs. The developing parasitic larvae eat the cricket from the inside, exploding out of its body as they grow. Crickets in areas with these parasites quickly evolve “chirplessness.” Do camel crickets need to worry about these “Alien” chest-bursting scenes? While they do have a doozy of a parasite (an intestinal parasite that weakens the cricket enough to ensure predation), the infections are not related to sound production.

Perhaps camel crickets simply lost their physical ability to chirp. Most crickets produce sound by rubbing their wings together. Camel crickets, though, don’t have wings. In a basement, flying is probably not the most effective means of transportation.

The Scent of a Cricket

So, how do camel crickets find each other without sound? One word: pheromones.

Pheromones are used by many cricket species to indicate dominance, reproductive readiness, and location. Camel crickets release a scent that causes them to congregate. Researchers determined the pheromone is unrelated to reproduction since juveniles move toward the scent too. Nagel and Cade3 think the pheromone prevents camel crickets from drying out. We do know the antennae detect these pheromones. In a rather disturbing experiment, researchers found that camel crickets don’t aggregate when their antennae are lopped off.